With an expansive territory and strong population numbers, white-tailed deer are the most sought after big-game animal in North America. White-tailed deer are found all across the country, from desolate plains in the West to urban backyards on the East Coast. No matter the location, bowhunting opportunities are abundant, and knowing when and where to locate deer is critical to success.

Let’s explore the five times of year deer are most active, and how bowhunters can use this knowledge to their advantage. During the summer months, alfalfa, soybean, and milo fields are the fare of choice for deer throughout much of the United States. Photo Credit: Tyler Ridenour

Most bowhunters reserve the summer months for preparation for the upcoming hunting season, which begins as early as September in some states. Summer prep includes practicing shot placement, fine-tuning equipment and scouting the area for deer signs. Observing where deer regularly feed is the first step to any summertime scouting mission.

Deer are extremely visible from July to September. Food is plentiful during this time, and white-tailed deer take full advantage of the smorgasbord of nutrients available to them. Velvet-racked bucks and does accompanied by spotted fawns feed regularly on agricultural fields in the evenings. Alfalfa, soybean, and milo fields are the fare of choice for deer throughout much of the United States. In places where crops are scarce, deer typically feed on native grasses and shrubs.

Once you’ve found a whitetail “hot spot,” it’s time to look for travel signs. Deer trails are excellent hunting locations. By following them away from a food source, you may discover bedding areas, areas of cover where deer lie during much of the day. Knowing where bedding areas are located is valuable both during the summer and later in the year (more on that later).

If your state has an early hunting season, take note of summer feeding patterns. These food sources can help you identify hunting locations for early-season success. Deer trails are excellent hunting locations. By following them away from a food source – like a stand of acorn-laden oak trees – you may discover bedding areas. Photo Credit: Tyler Ridenour

Think of the one food you just can’t resist. Maybe its pizza, mom’s homemade lasagna, or fresh-baked chocolate chip cookies. For white-tailed deer, the meal that tops all others is acorns. When these nuts begin falling from oak trees, deer abandon their previous food source in favor of acorns, and likely eat them until they’re all gone! Oaks generally start dropping their mast during September, with some variation from year to year and region to region.

When the first acorns hit the ground, bowhunting strategies must change. Deer will likely be much less visible in open areas, making trail cameras ideal scouting tools during the acorn binge. Locating and hunting stands of oaks is a nearly perfect recipe for success during this time. 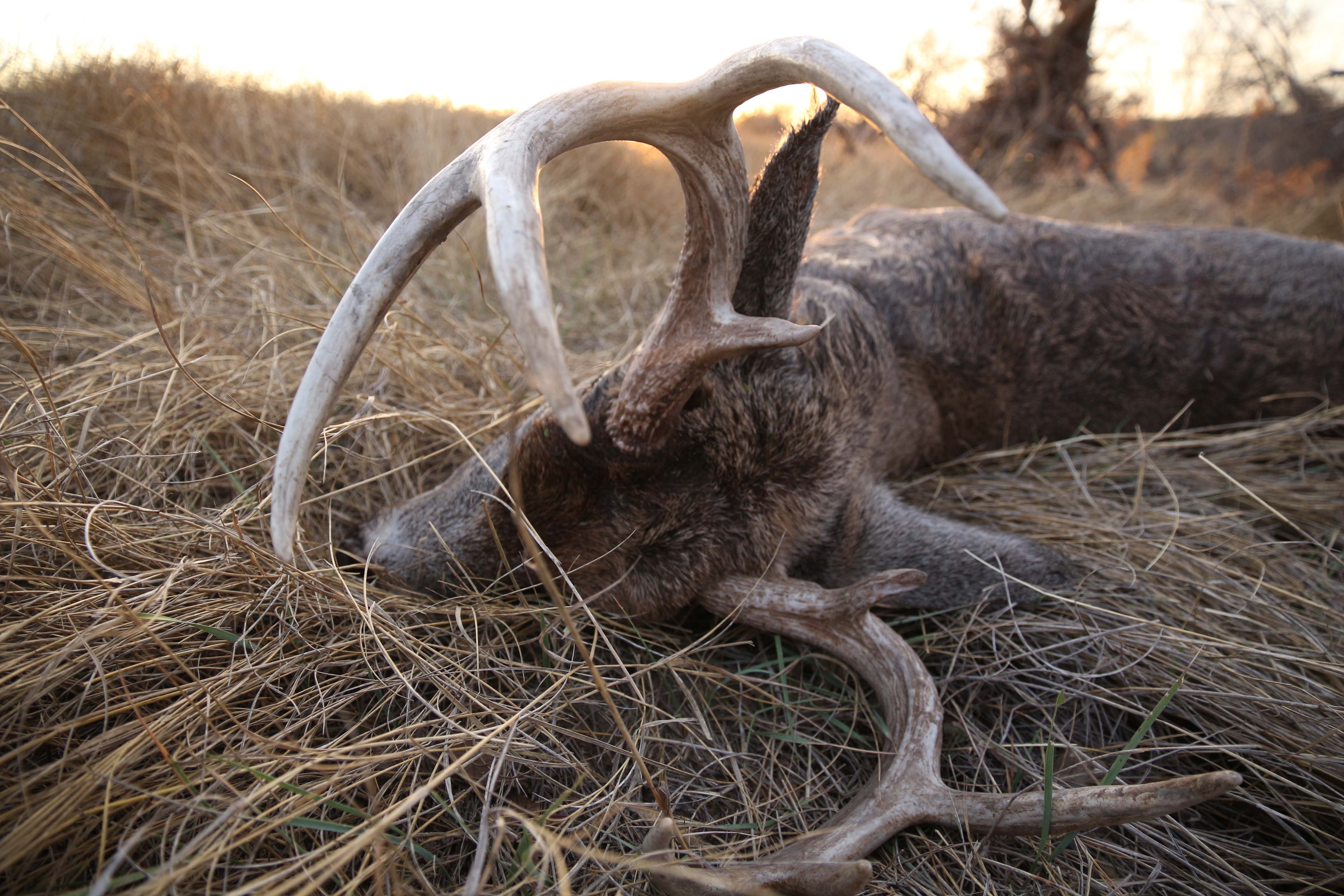 Bowhunting during the whitetail breeding season, or “rut,” is a common tactic among deer hunters. Photo Credit: Tyler Ridenour

The whitetail breeding season is most commonly referred to as “the rut”. The timing and intensity of this event varies depending on the region of the country where you hunt. In Northern states peak breeding generally takes place during the first half of November. Farther south, the heart of the rut runs later. In places like Texas and Mississippi, it lasts all the way into December and January.

The rut is the one deer-hunting topic that’s been written about, debated, and researched more than any other. Deer hunters plan, prepare and save vacation time all year long for the rut. It’s the time when bucks are most active and most vulnerable. If your goal is to fill a buck tag, there’s no better opportunity to do so than during the rut.

If you want to put fresh venison in the freezer, you don’t want to miss bowhunting the rut. Events that cannot be witnessed any other time of the year take place during this time. For example, bucks rub their antlers on trees and paw the earth as a way of marking their territory; fight with one another to defend their right to breed with does that live in the area; and chase does to near exhaustion until they comes into estrus.

Remember those bedding areas we mentioned when discussing summer scouting? Remember how I said they would be important later in the year? Well,  the rut is when they come into play. Rutting bucks use their incredible sense of smell to seek out does who are ready or almost ready to breed. Does give off distinct odors when they near peak estrus, and bucks cover expansive lands searching for this scent. They check areas downwind from bedding areas where does regularly congregate several hours during the day. Setting up a treestand or ground blind on the downwind side of a bedding area to intersect crossing bucks is my favorite hunting tactic during the rut, and can produce action all day long. During post-rut, wheat, which is generally planted in the fall, takes seed and provides whitetails with a tender, green food source for grazing. Photo Credit: Tyler Ridenour

Bowhunters often overlook this opportunity to capitalize on increased whitetail activity. After the rut, bucks and does alike are exhausted from the physical-activity spike they experience during the breeding season and need to prepare for the winter ahead  by replenishing the calories they burned. Much like during summer feeding, deer seek out the most readily available food sources. Bowhunting strategy during this period is similar to the early season. Field edges and travel routes to food sources provide exceptional hunting opportunities.

You’ll likely find whitetails drawn like magnets to places where crops are still standing. Fields where crops have already been harvested are also great places to locate deer; they feed on whatever the combines left behind. Also during this time, wheat, which is generally planted in the fall, takes seed and provides whitetails with a tender, green food source for grazing.

The second rut – that’s right there’s more than one! – is another key event that lends itself to bowhunting success. During this time. any does that weren’t bred during the primary rut come back into estrus 28 days after their first breeding cycle. For most white-tailed deer, feeding remains their primary focus, so if you’re looking to fill a buck tag post-rut, concentrate on areas where groups of does feed, and you just might have a buck show up to investigate.

5. Late Season and Beyond In winter, deer trails, bedding areas and buck signs left behind from earlier rut activity are easily identified and provide valuable knowledge that can be used for seasons to come. Photo Credit: Tyler Ridenour

As winter sets in, there’s one thing on the mind of a white-tailed deer: food. This is especially true in Northern states where temperatures get brutally cold and snow piles up. Deer need every calorie they can get to survive the harsh elements. Therefore, whitetails are found in large groups near the most accessible food sources. In an effort to conserve energy, deer often bed much closer to food sources than earlier in the year, making hunting over or very close to their feeding areas the best tactic.

Winter also provides outstanding opportunities to scout and learn more about the areas you hunt and how deer use them. With the leaves off the trees and snow or mud generally present on the ground, signs of deer activity become more visible. Trails, bedding areas and buck signs left behind from earlier rut activity are easily identified and provide valuable knowledge that can be used for seasons to come.

Another benefit to winter scouting is the opportunity to find shed antlers from bucks that survived the hunting season. Plus getting fresh air and stretching your legs is a great way to relieve cabin fever. Bowhunters increase their chances for success by scouting deer and noting their behavior and feeding patterns throughout the year. Photo Credit: Tyler Ridenour

While it’s impossible to know exactly when and where whitetails will be or what they will do, these five key times of heightened activity should help you get started on the right track. To me, it’s the mysteries of deer hunting that make it so compelling. We bowhunters are all students. There’s always something new to learn, so enjoy the chase, embrace your failures and good luck!

Elk 101: Everything You Need to Know About these Majestic, Antlered Animals